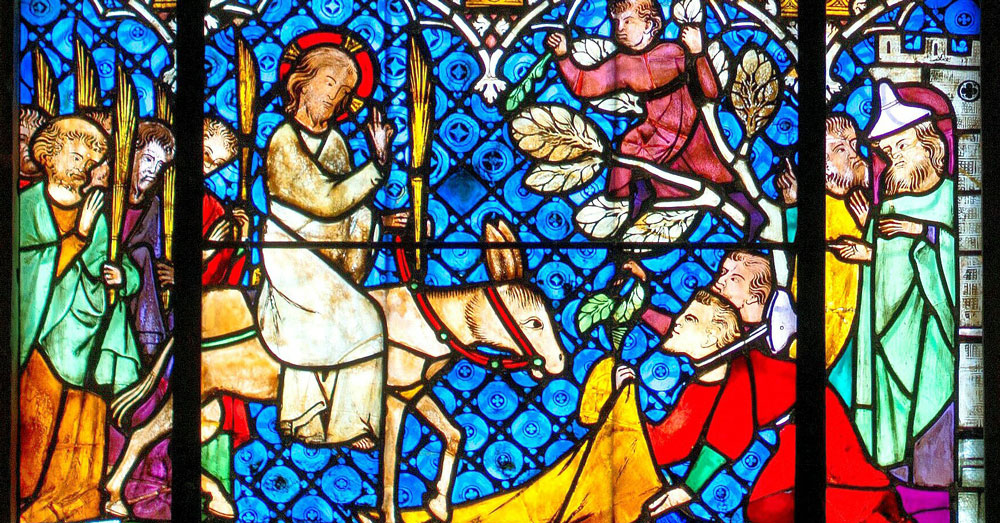 As the choir would have sung two pieces in church for this week’s Palm Sunday festivities, I have chosen two works for today’s Music List.

Arr. Shaw – Ride on King Jesus
We begin with a piece which our choir have sung every Palm Sunday in recent times, an arrangement of the Negro Spiritual “Ride on, King Jesus”.

Spirituals were a very powerful way of letting slaves express their feelings, a way of letting them share religious, emotional and physical experience through the medium of song. They focused on Christian values: slaves tended to identify with the suffering of Jesus, and the exile of the Jews in the Old Testament, in a very personal way through their own hardships.

Ride on, King Jesus is a message of defiance. The text says over and over again “No man can a-hinder me”. The imagery is clear: Jesus, despite all of his suffering and in the face of great adversity, rode proudly in to face his punishment and lead his followers to the promised land. The people who wrote this would have been slaves for their entire lives (“I was young when I begun/now my race is almost run”), so to follow a King who nobody could hinder would give them the strength they needed to survive. The spiritual has a strong, visceral rhythm (it would likely have been accompanied by drums) brought out by Shaw’s simple arrangement.

Here it is, sung by the Robert Shaw Festival Singers: Click here.

Orlando Gibbons – Hosanna to the son of David
The second piece takes the text of today’s Gospel as its basis: “The crowds that went ahead of him and that followed were shouting, ‘Hosanna to the Son of David! Blessed is the one who comes in the name of the Lord! Hosanna in the highest heaven!’” Orlando Gibbons gives us a masterclass in madrigalian polyphonic writing. English madrigals, of the time Gibbons was writing, used extreme musical colours and effects to highlight the text. Singers would often find themselves mimicking musical instruments or country scenes, as exemplified by the opening of this work. The voices set the scene of the crowds welcoming Jesus as he approaches Jerusalem: the vocal entries following quickly on from one another evoke images of a multitude of people shouting praise, and of church bells ringing to welcome Jesus (I suspect that part is a more modern-day interpretation!).

The second section begins almost hypnotically, the crowds now whispering constant repetitions of the word “blessed”, before gradually increasing in intensity through “blessed be the King”, returning to the exultation of the opening. Gibbons controls his musical crescendo through the speed at which the vocal entries mimic each other, and through the vocal range in which they do so. At “peace in heaven” the texture suddenly thins out, an oasis of calm and beauty, before the crowds return in spectacular fashion with “and glory in the highest places”. The music quietens slightly, and seamlessly transitions into a repeat of the opening. Nothing in the music instructs us to sing softer at this point, but it is often a good idea to bring the voices down a little to allow for all new entries to be heard (different musical phrases or new text), particularly when they start in a low range, as happens here. After a few bars of the opening music, the basses come crashing in with a glorious phrase, leading the work to a rousing finish.

Here you can listen to the choir of Clare College, Cambridge, and their energetic performance Click here.