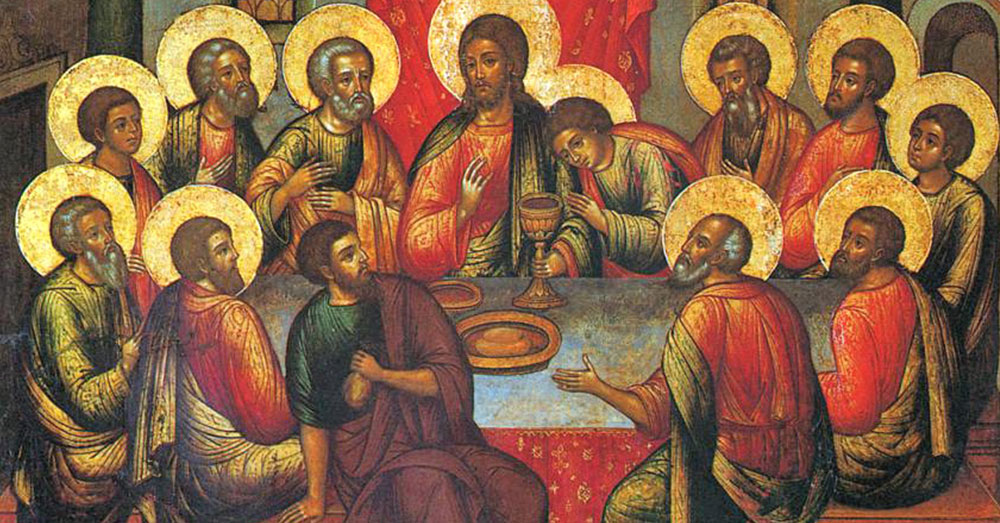 We are offering two pieces of music for Maundy Thursday, an Offertory motet and a Communion motet.

Maurice Duruflé’s (1902-1986) oeuvre is relatively limited: he was, as many musicians are, a perfectionist, and one who frequently scrapped many of his compositions due to them not being good enough in his eyes.

What he has left us with is some of the finest French choral and organ music of its time. Those who know his Requiem (1947) will know just how mesmerising his music is.

Duruflé was a chorister in Rouen Cathedral in the early 20th century, a choir whose foundation was built upon singing plainsong. The influence this had on Duruflé is clear in his writing: much of his organ music, and almost all of his choral music, is based on plainchant. Today’s offertory motet, Ubi Caritas, is the first of his set of ‘Four Motets on Gregorian themes’. The plainchant melody is carried by the altos at the start, with the tenors and basses harmonising softly underneath. It is possible to see Duruflé’s writing in this motet as organ registration: the opening alto line as an 8′ flute, accompanied by strings, the entry of the sopranos and basses as introducing the 4′ register and a 16′ on the pedals, and the diminuendo to the repeat of the opening section as one that gradually takes the stops away (the sopranos end up singing in the alto register).

Durufle’s setting of the text is exquisite. The first section is prayerful and very much internal, and when the full choir enters for the first time at the text “Let us rejoice and be pleased in him“, the extra range given to the choir by the sopranos and second basses creates a glorious sound. The chant itself passes briefly to the sopranos, before the altos take it back again in the middle of the texture (marked ‘en dehors‘ – ‘to the fore’). When the text returns to being about ourselves, rather than about God (“And may we love each other with a sincere heart“), the music softens again, becoming incredibly tender and personal. The opening text, and music, return again at the end, bringing with them the prayerful repose of the start.

Here is John Rutter, with the Cambridge Singers, giving us his interpretation: Click here.

Anton Bruckner (1824-1896) was one of the great Romantic symphonists. He was an organist of high repute, one who toured Europe as a recitalist (he played in England twice, in Crystal Palace and at the Royal Albert Hall. It wasn’t until he was in his mid-30s that he began to compose seriously: he was a largely self-taught composer until that point, earning his money as a teacher and as an organist. His early works he considered as mere ‘studies’, written mostly for his development under his new composition teacher, a music theorist called Simon Sechter. His music found a new lease of life, however, once he encountered the music of his main influence, RIchard Wagner, in the early 1860s.

Bruckner’s religious music is slightly at odds with the rest of his output. Much of his choral writing is simple and contrapuntal, as opposed to the vast swathes of chromatic harmony of his symphonies. In Christus factus est (1881), however, one can see all of the elements of Bruckner’s training. The text is clear, and the rhythm simple – a mix of homophonic and contrapuntal. The harmonies are simple at first, but become more and more chromatic as the piece goes on (interestingly, one of the main differences between Wagner and Bruckner is that Wagner writes melodies which lead the harmony, whereas Bruckner writes harmonies which form a melody). The rising phrases which feature at “a name which is above every name” are exhilarating to listen to: Bruckner at his symphonic best. If one listens closely it is possible to hear orchestration within the music, too: the celli and bassi at “mortem autem crucis“, the ‘hunting horn’ tenor entry at “propter quod et Deus“, the trombones at the very start.

The setting begins broodingly, the held D minor chord creating a sense of foreboding, a warning of what is about to happen on Good Friday. The only mention of Good Friday itself is an incredibly tender moment, Bruckner suddenly shifting the harmony to a beautiful and radiant Db major on “crucis“. The piece then builds to a dramatic apex at “quod est super omne nomen” (the altos begin the crescendo by suddenly flying up a 10th to a top Eb, then keep getting higher, and after a very dramatic silence the voices let rip). Bruckner, however, avoids all sense of a triumphal ending. He repeats the text a number of times, getting softer and more sparse each time.

Here is a recording, performed by Tenebrae: Click here.

Where charity and love are, God is there.
Christ’s love has gathered us into one.
Let us rejoice and be pleased in Him.
Let us fear, and let us love the living God.
And may we love each other with a sincere heart. Amen.

Christ became obedient for us unto death,
even death on the cross.
Therefore God has highly exalted him
and has given him a name which is above every name.