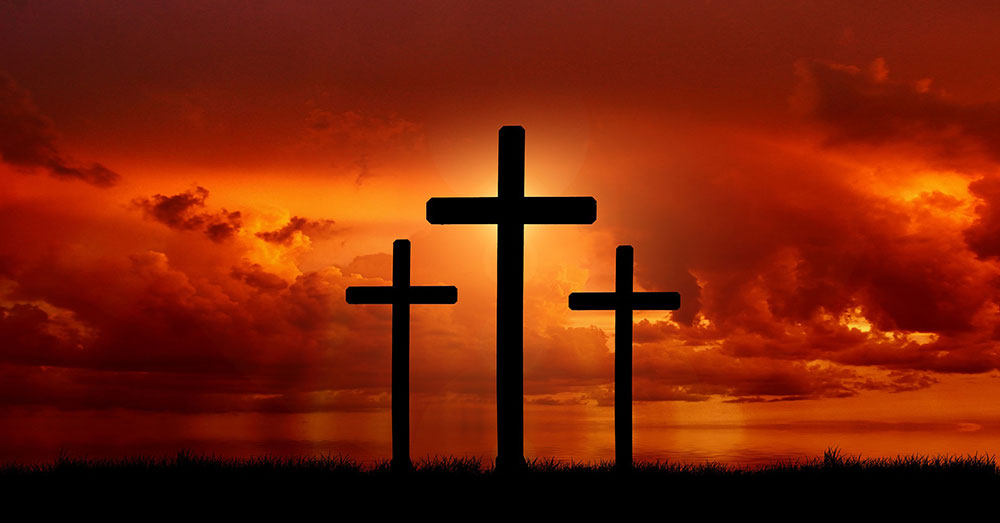 For today’s music list we have two contrasting works, each showing the horror of the crucifixion in their own way.

A staple of music lists of many Cathedrals and churches up and down the country, Lotti’s famous setting of the Crucifixus is not actually a stand-alone setting. It is from a larger work, Credo in F, which in turn was placed by Lotti into a full mass setting, his Missa Sancti Christophori. The piece has

become famous not just because of its complexity and passion, but simply because it was included in an 1838 collection of sacred music by Friedrich Johan Rochlitz (1769 – 1842), “Important Pieces from the Origin of Regular Harmony to Modern Times”. It is one of several large-scale Crucifixus settings written by Lotti.

The music itself is set apart from the rest of the mass by its instrumentation: the remainder of the movement is scored for organ and strings, but for the Crucifixus the strings disappear, leaving the organ alone to accompany the singers. Some directors take this a step further and perform the Crucifixus unaccompanied. The change of texture gives, to me at least, the impression that the work is building from absolutely sparse nothingness. The very start of the work, with its harmonic clashes, is one of the most famous moments in the history of music, but what I like about it is the underlying rhythm: the regularity with which each part enters gives the effect of moving inescapably towards the cross.

This feeling of the inescapable continues in the second part, but with regular quaver movement making it all the more intense. The quaver movement remains pretty much constant until the music reaches the word “passus” (“suffered”), when Lotti brings back the dissonant, long phrases from the start. The choir take what feels like a monumental breath, and then once they have landed strongly on the final repetition of “passus et sepultus est” the music dissipates, returning to the bleakness of the opening. Lotti ends with a tierce de Picardie, finishing on a major chord (I personally would have expected an open 5th on the last chord with no third – a device often employed by organ continuo players to show the truly dark moments in baroque music).

Here it is, sung by the Cambridge Singers: Click here.

And here, as a bonus, is the choir of All Saints, Margaret Street, from their own living rooms, recorded yesterday. I’m singing second bass and first alto! Click here.

Francis Poulenc’s musical style can be traced back to a very young age. His father was a very strict Roman Catholic, and his mother an artisan who was an accomplished pianist. He would listen to her playing music from classics to what Poulenc called “adorable bad music”. Claude Rostand, a music critic, described him as being “half monk and half naughty boy”. Both of these personalities are prevalent in his musical writing. Poulenc’s harmonies are also a mix of both: he creates his unique musical style by juxtaposing standard chords which would never normally go together, and by adding one rogue note in an otherwise normal chord, all with a heavy jazz influence.

Much of Poulenc’s earlier music is light hearted and jovial. Before 1936 he had written only one piece of choral music, the Chanson à Boire (“Drinking song”). It was a tragic event, the death of his close friend Pierre-Octave Ferroud in 1936, that changed his focus. He visited a religious commune at Rocmandour, and was so moved by the statue of the Virgin Mary that he wrote his Litanies à la Vierge noire, the first of his serious religious works. These were closely followed by his four Lenten motets, Quatre motets pour un temps de pénitence, the third of which we are listening to today.

The text for Tenebrae factae sunt (“There was darkness”) is found in the Responsories for the second nocturn (the night-time liturgy) of Good Friday. Poulenc’s setting is one of contrast. He uses what I would describe as ‘internal’ and ‘external’ repetitions of text, moments of extreme anguish in which you might shout something outwardly, or whisper something quietly to yourself: for example at “Deus meus” (“My God”) and at “Ut quid me dereliquisti” (“Why have you forsaken me?”). He shifts throughout between stillness, where time seems to hang in the air (“et circa horam nonam” – “and at about the ninth hour”), and heart-rending outpourings of grief at the crucifixion. The loneliness of the single-voice settings of “and bowing his head” is incredibly powerful, as is the simplicity with which the piece ends at “he gave up the ghost”. Poulenc marks no pause and no slow up on the last note – you simply hold on for two and a half beats and stop.

Here is it, sung by The Sixteen: Click here.

Texts and translations:
Crucifixus etiam pro nobis; sub Pontio Pilato passus et sepultus est.
He was crucified also for us; under Pontius Pilate he suffered and was buried.