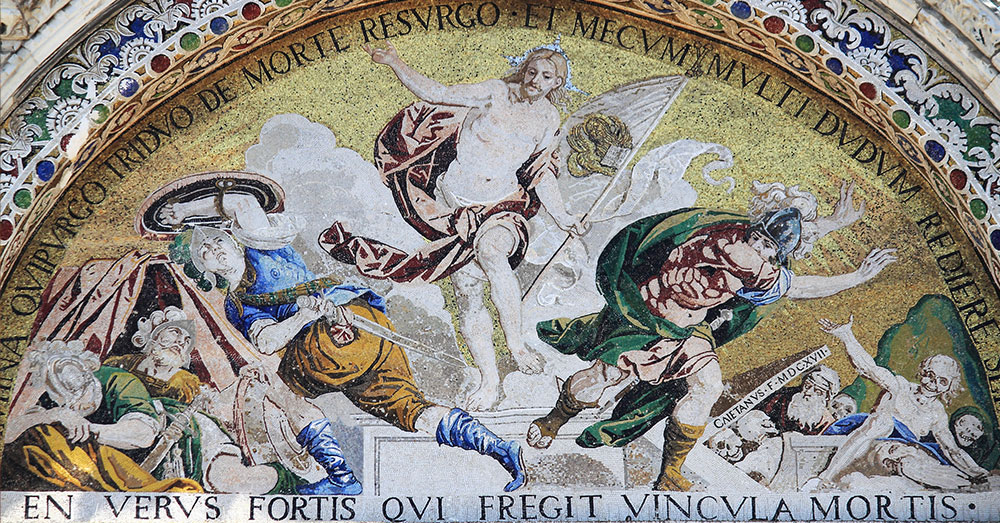 For this Sunday I bring you two works to celebrate the Ascension, one more familiar to you as a congregation and one which is not (yet) in the church’s repertoire. I will be performing the Philips at the morning service.

Peter Philips is one of the greatest composers, alongside William Byrd, of the Counter Reformation. He was born and educated in Britain (he was a chorister at St. Paul’s Cathedral

under Sebastian Westcott, who had trained Byrd some twenty years previously), but was forced to flee the country at the age of 22 because of his Catholicism. He found himself firstly in Flanders, before embarking, either on his own or with a patron, on a nomadic lifestyle around Europe. He settled at various point in Rome, Brussels, Genoa, Paris, Madrid, before finally settling in Antwerp. Because of this, much of his music has a strongly European flavour to it. On settling in Antwerp he fell under the influence of Jan Pieterzoon Sweelinck, whose lively madrigalian style of composition can be found in much of Philips’s music. Interestingly, it was whilst travelling back from a trip to Amsterdam to meet Sweelinck that Philips was arrested on suspicion of a plot against Queen Elizabeth. After translating his own charges at the trial, thus proving he could speak Dutch, he was acquitted of all charges.

In Ascendit Deus one can hear the influence of both Sweelinck and Byrd very clearly. The opening section is a joyous fanfare, with the two soprano parts interweaving to create an antiphonal effect which sounds like hosts of angels singing. The melodic writing contains wonderful overlapping ascending phrases which symbolise Jesus ascending into heaven (alongside a fantastic bit of alto writing – a set of triplets which go against all the others part. At ‘et Dominus‘ the music for a moment becomes harmonically static, as is common with trumpet fanfares, leaving us in no doubt which instruments Philips is imitating, before he ramps up the rhythmic complexity at ‘in voce tubae‘, underpinned by a glorious low Bb from the basses (low trombone writing at its best), a section on par with the greatest of William Byrd’s madrigalian writing. The alleluia is full of bubbling energy and excitement – every time I perform it I ask the singers to drop in dynamic and grow throughout, singing all the alleluias in one breath. It’s a thrilling effect.

Philips’s use of counterpoint is superb, particularly in the second half of the work. He writes in such a way that the interest is constantly switching between parts, a compositional device which is especially effective when the energy of the music drops. The section begins with some beautiful word-painting, the voices all rising in tessitura until they reach the word ‘coelo‘ (‘heaven‘), before again beginning to build, slowly, towards the final alleluia, which for me is the best part of the piece. Philips switches into 3, and for the full dance-like effect brings all the voices together, creating a feeling of pure joy.

Here is Graham Ross with the choir of Clare College, Cambridge: Click Here

William Croft is one of the more important composers of the English Baroque. Whilst his choral writing is technically excellent (one can hear the influence of William Byrd and Orlando Gibbons in his music, alongside that of his near contemporaries John Blow and Henry Purcell) it is in the field of instrumental music where he made most of his impact. He was one of the first British composers to embrace the style of the sonatas which were being composed in Europe at the time, particularly those of composers such as Corelli, Bach, and Handel. Croft was familiar with the Italian style of writing in particular due to his friendship with an “Italian Mr.”, presumed to be the nominatively-determined Gottfried Finger, an Italian viol player. Croft published his violin sonatas (1699) alongside three flute sonatas by Finger, who had published several violin and flute sonatas a few years previously (1690) with a dedication stating that “the humour of them is principally Italian”, a nod to the compositional styles he picked up during his travels in Italy and would have shared with Croft.

Closer to home, Croft’s main influence was his teacher, John Blow, who had a huge influence over British music in the late 1600s and beyond, including that of Henry Purcell. Croft was a chorister at the Chapel Royal, where Blow gave him his musical education lasting until Croft was 20 years old (gifted choristers often stayed in the Chapel choir well after their voices broke). On leaving the chapel, Croft was appointed organist at St. Anne’s, Soho, before returning to the Chapel Royal as one of two organists (with Jeremiah Clarke). On the death of Blow, Croft was also appointed organist of Westminster Abbey. Whilst Croft had some extraordinary composers to study, Croft’s choral output has been deemed as “solid”, rather than containing the creative brilliance of Blow and Purcell in particular. He is a gifted composer, but one who strictly followed the structures of the day, rather than pushing the boundaries in the way Purcell did, and Handel was beginning to do later in Croft’s life. Croft himself admitted this – in his most famous and long-lasting work, the Funeral Sentences (published in 1724), Croft uses a setting by Purcell for one of the sentences, claiming:

“The reason why I did not compose that verse anew (so as to render the whole service entirely of my own composition) is obvious to every Artist; in the rest of that service composed by me, I have endeavoured as near as I could, to imitate that great master and celebrated composer, whose name will for ever stand high in the rank of those who have laboured to improve the English style…”

In God is gone up, one can see the various influences coming to life in Croft’s music. The music is a mix of old and new – the outer sections being strongly influenced by Tudor counterpoint, and the middle section by more contemporary music. The first section is written in a sprightly fugal style, very much in the manner of the Tudor composers of Britain, especially that of Gibbons, but with a few harmonic twists which are reminiscent of Purcell. The word “solid” could be used here again – once he has picked his theme Croft simply stays within the structural boundaries of a fugato. To me the music feels almost more like it should be played on an organ or a brass consort. The meticulous structure gives it real energy and life. The second section is in the style of a verse anthem by Henry Purcell, alternating Soprano/Alto with Alto/Tenor/Bass. The repetition of “sing praises” over the wonderfully elegant dance, with its lively dotted rhythms, gives the music a sense of pure joy. The final section again returns to the fugato of the opening, although it is often taken slightly slower to sound more regal (“For God is the King of all the earth“). My favourite moment is when Croft brings all the voices together in the middle of the fugue – it feels like everyone is shouting praise to God. It is a lot of fun to sing.