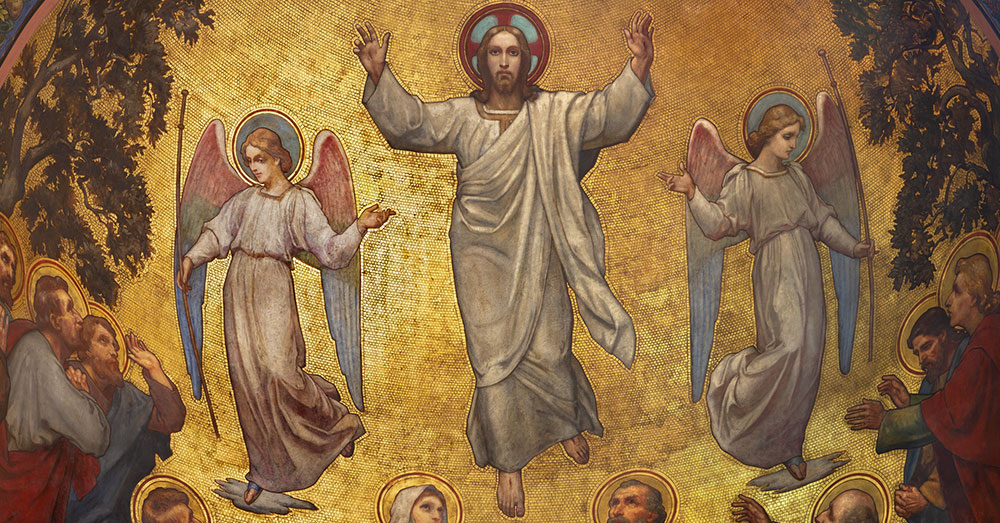 For the feast of the Ascension we return to 20th-century England, to one of the finest British composers of his generation.

Gerald Finzi is one of Britain’s most-loved composers. His specialism was in the form of the art song, where he focused on setting his favourite poets

(Thomas Traherne and Thomas Hardy in particular) to music. He wrote nine song cycles, six of which are of poems by Hardy, for voice and piano (with one for string quartet). Finzi’s choice of poetry, and his musical style in general, is often elegiac in quality: he was deeply affected by the loss of his father, his first composition teacher (at the Western front), and all three of his brothers, which led him to find solace in poetry and composition. Partly because of these losses at a formative age Finzi became a pacifist: one piece I have performed many times is his Farewell to Arms (1944), a beautiful, reflective, and quietly hopeful setting of the poetry of Ralph Knevet and George Peel: FInzi himself discovered Knevet’s poem (which opens with the same imagery as Peel’s poem) during the war, adding it to his astonishing library of over 3000 books.

After the death of his teacher (Ernest Farrar), Finzi moved to York to learn with Edward Bairstow, the then organist of the minster. He never enjoyed city life, preferring the peace and fresh air of the countryside, and five years later (in 1925) moved to Painswick, where he began composing full time. On advice from the conductor Adrian Boult, Finzi briefly moved to London, where he fell into the social circles of composers such as Vaughan Williams, Gustav Holst, and Arthur Bliss. Vaughan Williams managed to obtain a teaching post for him at the Royal Academy of Music, but his dislike of city life again took hold, and only three years later he moved out to rural Wiltshire to reunite himself with his preferred surroundings (interestingly, Finzi’s other passion became apple growing: he is credited with saving a large number of British apple species from extinction, including Norman’s Pippin, Lord Lennox, and Baxter’s Pearmain).

Finzi wrote a large amount of sacred Christian choral music alongside his secular songs, which might seem a little unusual given that he was an agnostic and of Jewish heritage. His choral music, with a few notable exceptions, has a similar elegiac feel to it, and even those works which are more exuberant still have a reflective quality to them. One only needs to think of the glorious Amens which he wrote in his larger settings (Lo, the full final sacrifice and the Magnificat), neither of which reach anything above a warm mezzo-piano: the Amen of the Magnificat in particular feels like an accepting and quietly content ending to an otherwise triumphal work. Finzi’s melodic writing is characterised by its angular nature. Almost every melody I can bring to mind contains a leap of at least a fourth, and it is a testament to his skill that they sound so lyrical. If you listen closely you will hear this in today’s anthem.

God is gone up is a relatively late work, written in 1951 (shortly after his diagnosis of Hodgkin’s Lymphoma). The opening introduction sets the musical style for the work: a fanfare for full organ making liberal use of any strong reeds/tuba stops an organ may have. The choir’s first entry, in unison, is one of the most exciting entries in any piece of choral music I know, an arpeggiated figure ending on a fortissimo top E (on the word “shout“. It most definitely can be!). Finzi subtly pulls the dynamic back a notch for the next phrase, the voices mimicking the trumpet fanfares we heard in the organ part at the beginning (with the use of a good “mm” consonant on “trumpets” one can bring this fanfare to life). I love the way that Finzi throws the phrase “seraphic-wise” around the choir: it gives the impression of thousands of angels singing as the ascension takes place.

The middle section is much more reflective, and the poetry becomes more personal, but for me this section has real magic to it. The melodies become more lyrical (but still full of leaps), the triumphalism of the opening music left behind, but there is a real sense of wondrous excitement beneath the music. The organ play-in is playful and fun, and the way Finzi sets the words “heaven’s sparkling courtiers fly” is a quiet explosion of joy, much like one might get on turning on the lights of a Christmas tree for the first time in the year. In the latter part of the section, FInzi interweaves the Soprano and Tenor parts with the Alto and Bass (“mixing their music, making every string…“) before leading into the most beautiful part of the piece (“more to enravish, as they this tune sing…“). The chord on enravish is, as Finzi will have intended, ravishing. The final section returns to the fanfares of the start, with a few subtle differences. The last phrase takes a thrilling turn on “Glory” to Fb major (E major) – the sudden brightness of the B natural, after a long period of Ab major, creates a real brilliance to the sound, creating the effect of almost battering down the door to heaven in excitement.

Here are the choir of St. John’s College, Cambridge, under the direction of Chrisopher Robinson: Click Here

And here are recordings of two other pieces I mentioned. Firstly, Farewell to Arms, performed by James Gilchrist and the Bournemouth Symphony Orchestra, part 1: Click Here

God is gone up with a triumphant shout:

The Lord with sounding Trumpets’ melodies:

Unto our King sing praise seraphicwise!

Lift up your Heads, ye lasting Doors, they sing,

And let the King of Glory enter in.

In flakes of Glory down him to attend,

And hear Heart-cramping notes of Melody

Surround his Chariot as it did ascend;

More to enravish as they this tune sing.