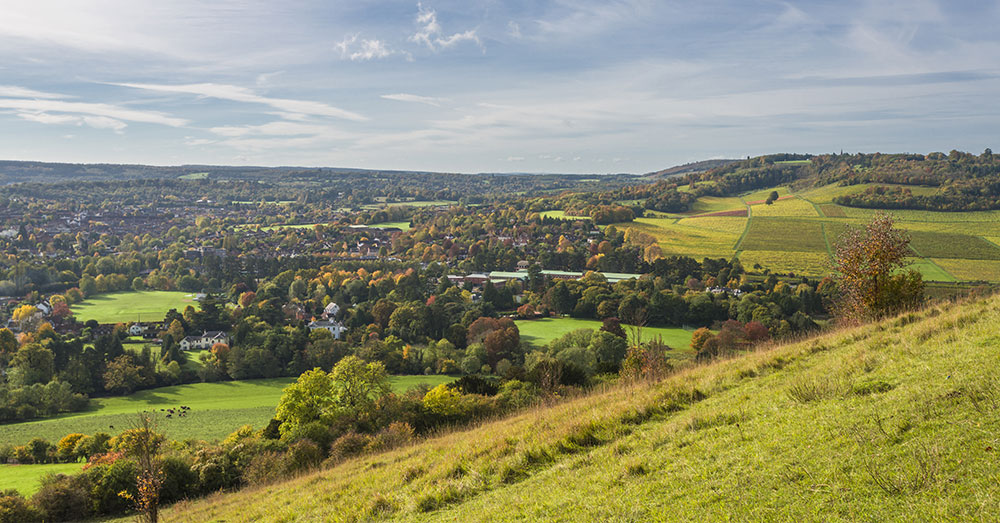 Ralph Vaughan Williams is another of my musical heroes. He attended my secondary school (Charterhouse) as a pupil, so his influence was all around me as I was growing up. The music building at the school is still called the Ralph Vaughan Williams building. His writing encapsulates and builds upon

what I love about British music from the turn of the 20th century: the understated passion, with more than a hint of the bittersweet, painted with a beautifully Romantic palette. He builds upon it using his connections to continental European music: his compositions, more than those of any other British composer of the time, are strongly influenced by the French impressionists (Debussy and Ravel in particular) with whom he pairs the modal harmonies often associated with folk songs, creating a unique and very personal musical language.

Vaughan Williams’s Five Mystical Songs (1911), scored for baritone soloist, choir, and organ (or orchestra) were a relatively early work, written just after he had returned from studying with Ravel in Paris. His music beforehand had been a little heavier, particularly his orchestration. Vaughan Williams himself said that learning with Ravel had helped him escape from “the heavy contrapuntal Teutonic manner”. As a work, they are meant to be performed together, but in a liturgical setting they are taken as individual motets. The writing is immensely evocative: Vaughan Williams, more than any of his British contemporaries, allowed his music to have a huge emotional range.

Easter is both a celebration of the resurrection and of music itself, specifically that music is both divinely inspired and the best way to show praise to God. George Herbert’s poetry is very direct – there is no hidden meaning or innuendo – which allows Vaughan Williams to utilise his new-found musical lightness to colour the text equally directly. He does this in a way which carefully brings out the poetic devices. The first two words alone (“Rise heart”) are what is known as a spondee (two equally stressed syllables), which are set to two equal notes. This is a device which Vaughan Williams uses every time Herbert uses a spondee (“most high day” and “the cross taught all wood”, to name but two), and also to bring out his own interpretation of the text. A fine example of this is his setting of the word “stretched“: he sets it to two equal notes, going against the natural phrasing of the word, but creating the effect of stretching the word. Onomatopoeic text setting at its best.

There is also a connection to the Trinity in the text, Herbert links the musical triad itself to the Trinity (three equal notes making up one chord, or as the poem says: “For since all music is but three parts vied and multiplied“)

Musically, the work begins full of grandeur, given to us by the expansive melody and the slow harmonic change (one chord often lasts for a bar or more). The intensity and excitement is given to us by the rhythm – the unrelenting triplets, which last throughout the first section – leading us towards the climax of the first verse (“His life may make thee gold, and much more, just“). Shortly before that, the music becomes a little more understated at the first mention of the crucifixion, allowing the crescendo that follows to feel like a musical resurrection in itself. The second section transforms into a solo song for baritone and piano, the constant triplets ceasing and a much more florid, and pianistic, accompaniment emerging. Vaughan Williams’s word painting here is extraordinary, especially the sudden moment of stillness and reflection at “who bore the same“. One of my favourite phrases in any piece of music is “and twist a song, pleasant and long” – harmonically and melodically the phrase just sings. It also fits Herbert’s poetic meter perfectly. The music ends with a sense of calm (especially for artists!) in the knowledge that although we can never praise God perfectly through our music, we can let the Spirit of God “make up our defects with his sweet art“.

Here are all five of the Mystical Songs (with the score to follow!) performed by the BBC Symphony Orchestra and Chorus, with Thomas Allen – Baritone: Click Here