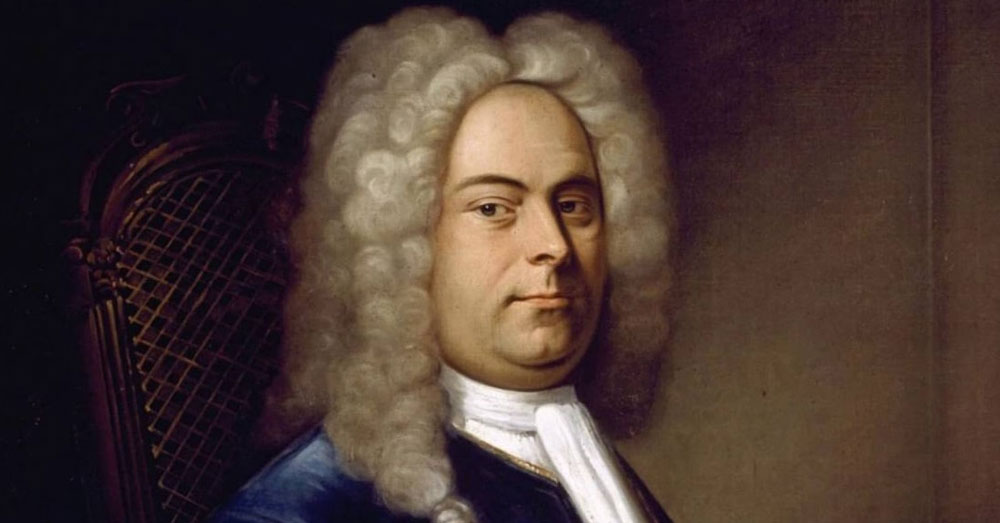 GF Handel – Worthy is the Lamb (from The Messiah)

This Sunday’s anthem is one of the finest final choruses in the history of music. I will never tire of performing The Messiah: in my opinion it’s one of the greatest pieces of music ever written.

George Frideric Handel is one of Britain’s stand-out composers, in spite of the small issue of him being German

(he was born Georg Friederich Händel in Halle, which is found in what is now the state of Saxony-Anhalt. Leipzig is only a few kilometers away). He was born in what has become known as the golden year of music, 1685 – JS Bach and Domenico Scarlatti were also born in the same year. His musical upbringing was entirely in continental Europe, specifically in Germany and Italy. At a very young age he was introduced to the Duke of Weissenfels, who was so impressed he suggested that Handel immediately undertook musical training. He was put under the charge of an organist called Freidrich Zachow, who possessed in his library a huge collection of music of styles old (contrapuntal and polyphonic music) and new (the florid, improvisational style of Frescobaldi), along with composers such as Froberger, who combined the German and Italian styles of the time – something which greatly influenced Handel. Many of Handel’s compositional traits can be traced back to the time he spent copying music from this library.

Handel was also a renowned organist and harpischordist at a very young age. He frequently deputised (at around the age of 9) for Zachow at church – Zachow was often off sick due to “his love of company, and a chearful glass” – and at the age of 17 was appointed the organist of the Domkirche in Halle. His duties as an organist brought him into contact with fellow composer GP Telemann, who was assisting Kuhnau, Bach’s predecessor at the Thomaskirche in Leipzig. The two young composers spent hours studying Kuhnau’s music, gaining further understanding of how to write fugue and counterpoint. From there Handel moved to Italy, where he began to fuse his German and Italian musical ideas into his style of composition. Whilst in Rome, Handel composed much music for the church (including Dixit Dominus), alongside his first full Italian operas. By the time he moved to England in 1710 his musical style was well and truly established.

Because of this, when performing Handel’s music I treat it like that of the great German baroque composers, rather than of any English composers of the time. In Worthy is the Lamb this becomes especially important, given how German speakers pronounce the word ‘Amen‘ (the stress on the first syllable and a lighter, with a darker vowel, last syllable – *Ahh*-mun). Always phrasing away when singing ‘Amen‘ is imperative in this work. As with all Baroque music, the harmony for me is the key. Handel’s harmony at the start of the work really brings out the text. Harmonically, the first phrase builds to “slain“, and the second to “blood“. On the repeat of the text, the harmony builds instead to “Lamb” and then comes away, and in the second phrase builds to “God“, and then away. The shift in textual emphasis, the change of key between the two phrases, and the shift in vocal range all give an indication of a change in style between the first and second repetitions. If it were me, I would perform the second phrase much more tenderly.

The second and third sections of the piece show Handel’s mastery of counterpoint. The trick with the second section is to make sure the first fugal phrase goes somewhere. The subject has nine Ds in a row: it needs shape and direction, otherwise it ends up sounding like people shouting. For me, the phrase needs to start strongly, drop a little and then grow toward “him“. As I frequently shout at our choir when they’re singing: “to whom???”. Once that’s out of the way, Handel’s brilliant writing allows everyone to sing very lightly, letting through anyone who comes in with the main theme. It takes real discipline to sing fugues well – much of the battle is in listening, so you can hear when you are, and when you are not, the most important part. Again, all dynamics are based upon the harmony and tessitura.

The third section is one glorious crescendo. The start contains some of Handel’s most beautiful fugal writing. The phrases need their peaks and troughs, but generally speaking I like these first phrases sung through – if not, they end up becoming slightly sea-sick (which does happen a little in my choice of recording…sorry, guys!!). After a beautifully intimate string duet, the choir come in gloriously, with the basses leading the way with the tune. After another, shorter, string duet, the movement proper begins. The ebbs and flows come both from the harmony and the melody in this section.

The first part of the contrapuntal writing (letter H, in the video with the score) begins with phrases which keep rising by a tone each time, creating a natural crescendo. I have two favourite moments in this piece, firstly at letter K, where the diminuendo is created not only by the natural falling of the melody, but also of the introduction of a C natural, which softens the tonality as it heads towards G major. Three bars later, however, the C# returns, which immediately charges the music with renewed energy to go with the newly-rising melodies. The alto entry on a G, just before the sopranos final top A, is, in my opinion, the best note in The Messiah.

This piece, more than most, often suffers from “end of concert” syndrome, where people are so pleased to be on the final chorus after 2 and a bit hours of singing many fast notes that they simply shout it. I’ve certainly been guilty of that!! For me, the best performances have been when that doesn’t happen – if everything builds properly the ending is exhilarating.

The closest recording I can find to everything I’ve said above, so therefore my recommended recording, is Emmanuelle Haim with Le Concert d’Astrée: Click Here

And here is a video with the score (helpfully, YouTube says it’s performed by “unknown artist”): Click Here